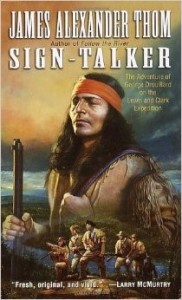 Book Review. Geography and History of the World by Scott Royer, McCutcheonHigh School; Lafayette, IN; 2008

Author Information:  James Alexander Thom is a local author who lives in Southern Indiana. He has written many historical novels about Native Americans. Some other titles include, The Red Heart, which is a story about Francis Slocum and Panther in the Sky which is about Tecumseh. His books are all entertaining, well researched and easy to read.

Theme: Movement of American settlement from the perspective of Native Americans

Target Audience: People who enjoy history and good stories/9th grade and above

Brief Description:  Sign Talker is about the Lewis and Clark expedition seen from the perspective of Drouillard, who was half French and half Shawnee. His expertise in both hunting and Native American sign language was the reason he was brought on to the Corp of Discovery. Drouillard and Sacagawea were the two unsung heroes of the voyage. Between her ability to communicate and find edible roots and plants and Drouillard’s hunting and communication, the members of the Corp of Discovery would most likely have starved or been annihilated by Native groups

Major Points, My Opinion and Use in the Classroom:  I would not have the students read the entire book due to time constraints. I would select a chapter or two for them to read and discuss concepts brought out in this book. It could be used along with Stephen Ambrose’s Undaunted Courage to analyze perspectives. Ambrose’s book, while well-written and enjoyable, it does not have the life that Sign Talker has. Thom’s ability to give the characters life and personality enriches the already exciting tale of the voyage. In addition to the characters, Thom has thoroughly researched the topic and leaves no stone unturned as he goes into painstaking detail of life on a waterway. I would recommend this book as a supplement to a U.S. History class, although it could be used in the Geography and History of the World Class.

Culture is at the heart of the book. Since most social studies classes deal with culture in some form, the book would be adaptable.  Perspective views of custom, interaction, religion, wild life and life in general are all brought out in this book. For example, Drouillard constantly jumps into the water, not matter of the season or water temperature. While the white members of the Corp think his is nuts, he does this to purify himself spirituality and practically as his human smell is washed away so he could more effectively hunt. He also believes bears are not inherently bad to humans, but once a vengeance kill is made by members of the Corp, he believes the bears warn each other and begin hunting the humans for revenge.

Thom erases our stereotypes of the cleanliness of Americans versus Native Americans when he highlights Drouillard’s bathing and his precaution when having intercourse with Native women, thus avoiding venereal disease, which many members of the Corp did get and are plagued by throughout the trip. He also contrasts spirituality when Drouillard prays and thanks the Great Spirit before killing game. White Americans kill bears for no reason other than fear or to procure specimens for Jefferson. Whites do this without a spiritual connection to nature.

By the end of the book, you feel that Drouillard is more civilized, spiritually in tune with the earth and generally better than the White members of the Corp of Discovery. I found myself getting uneasy each time Drouillard enters the White world in St. Louis and found myself wanting him to return West, where there was no urban corruption and congestion. While showing the value of the Native American way of life, Thom does not take away from the merits and accomplishments of Lewis and Clark.

Finally, the book would be a good companion to the National Geographic movie about the Lewis and Clark voyage. The visual displays of the physical geography in the movie would be a perfect compliment to the descriptions Thom gives of the unfolding natural beauty the Corp experiences. Like culture, geography is at the Corp of the book. It was a traveling tale that a group of people were moving through territory that had not been experienced by white Americans.

Thom does a good job of providing images of the landscapes as they change on the voyage out, as well as the seasonal changes they experience. Like the landscape, the people change both in customs and friendliness. He describes the Chinook people in the west who are very heavy set and attributes this to the abundance of Salmon that provide fatty protein and allow the people to stay sedentary without having to be migrant hunters like many of the plains tribes. He also shows how tribes that are in contact with White people, like the Clatsop tribe on the coast, have been nearly decimated due to disease, such as smallpox and venereal diseases, because of their proximity to trade routes.

The book provides many avenues of use in any Social Studies classroom. It is an enjoyable read and I would highly recommend it. If one does not use it in class, it would come in handy to get a humanistic background story to the Lewis and Clark expedition that could be discussed in class when this unit is covered.  Linking the book to an ELA classroom would be ideal.  Maps, landscape, language, culture, human spirit can all be covered in this story.