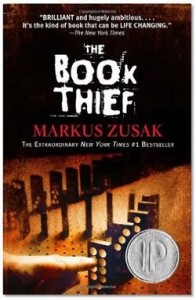 Author Information:  Mr. Zusak is an Australian author whose mother was German and father was Austrian.  He grew up hearing stories from his mother about Nazi Germany, the bombing of Munich, and of Jews being marched through the small German town where his mother grew up.  Listening to his mother’s stories inspired him to write The Book Thief.

Illustrator Information:  Ms. White is a native of Melbourne, Australia where she likes to move residences often to experience various city neighborhoods.  She left high school early to study art and design.  Ms. White also authors children’s books, such as Could You? Would You?, and young adult books.

Target Audience:  The content of the book is appropriate for upper middle school and high school; yet, the words may be a bit overwhelming for a middle school student.

Brief Description:  Focus on World War II Nazi Germany from the perspective of a young girl (aged 10-15) as told by the spirit of Death, who is fascinated by humans.  A young, illiterate girl from a Communist family comes to live with a German (Nazi, but, secretly, not supportive of the Nazi regime and methods) family in a small town outside of Munich.  The girl, Liesel, learns to read and write with the help of her beloved foster father and becomes obsessed with books.  As the War progresses, economic times become very severe for everyone; Liesel grows and gains friends and understands poverty.  Soon, a young Jewish man arrives to be hidden by the family in the basement.  The family learns to live a double life, and Liesel learns about the happenings in Germany and beyond.

The book is an amazing tale, yet, the use of language is beyond expectations.  On almost every page, words are utilized to convey a deeper understanding of the people and times.  For example, as her small neighborhood hid in a bomb shelter…”The cold hands melted into the warm ones, and in some cases, the feeling of another human pulse was transported.  It came through the layers of pale, stiffened skin.” (page 375) Or in another chapter about Liesel looking for her Jewish friend, Max, “…hair like twigs.  That’s what it looks like when it hasn’t been washed.  Look out for hair like twigs and swampy eyes and a kindling beard… The book thief stepped onto the road.  Never had movements been such a burden.  Never had a heart been so definite and big in her adolescent chest.” (page 509)  Or another thought from Death, “I climbed through the windshield of the truck, found the diseased man, and jumped out the back.  His soul was skinny.  His beard was a ball and chain.  My feet landed loudly in the gravel, though not a sound was heard.  But they could all smell me.” (page 389)

Your Opinion:   The book was an amazing journey through the use of words:  word catcher is used in the book to describe Liesel.  Word catcher is a good term to describe Mr. Zusak’s work in The Book Thief.  The book can be difficult to read at times, but persevere.  The beautiful presentation of language makes a very gloomy subject palatable.

In the Indiana middle school, grade 8 studies of the Americas in relation to migration and political ideology/governmental systems.  Grade 6 middle school Academic Standards that could be addressed would be 6.2.5, 6.2.6; 6.1.16, 6.1.20, 6.1.22; 6.3.3, 6.3.4, and 6.3.9 (Civics and Government, History, and Geography respectively).  In my opinion, the book could be read by an educator with a sixth grade classroom as the content and language MAY be difficult for younger students to grasp in the intended manner.  Sixth and eighth grade may focus on small segments of the book – dependent upon the comfort level of the teacher – and link to English Academic Standards (8.1, 8.2, and 8.3; 6.1 and 6.3).