Johnstown prior to the flood.  Image courtesy of the Johnstown Area Heritage Association

“Most of the people in Johnstown never saw the water coming; they only heard it, and those that lived to tell about it would for years after try to describe the sound of the thing as it rushed on them”

Johnstown after the flood.  What  landscape changes between the two photographs do you notice? 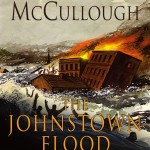 The Johnstown Flood by David McCullough is a riveting account of the 1889 Johnstown Flood.  McCullough takes the reader through the days and weeks leading up to the massive flood that killed over 2000 people and leveled the Pennsylvania City. This work of nonfiction culminates with the actual flood that was spurred by a dam break that resulted in a miles long tidal wave.  Who or what was to blame?  Students will enjoy debating this question as well as exploring the environmental factors that caused such a horrific disaster.